In which Emma prepares for a journey. 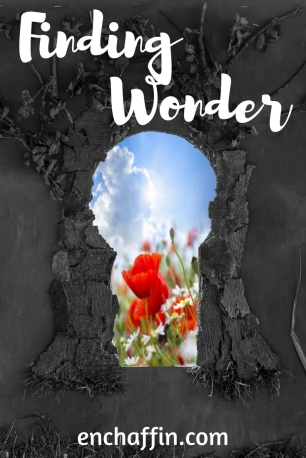 When did her pillow have feathers?

She knew she had one of those furry pillows back home in the city – the neon pink one she always propped up behind her while she sat on her bed. But she didn’t bring that one with her this summer . . .

Two big blue orbs looked back at her. Then, her pillow squeaked.

She jumped away from it and screamed. Her butt landed hard on the floor as her pillow unfurled itself into a flamingo-cat hybrid thing and squawked. It flapped its wings and scuttle to the furthest side of the bed.

Emma’s eyes jerked around the room.

Green, polka dot wallpaper decorated the walls. Besides the oddly shaped bowler hat bed she was just on there were just a bowler hat side table, a bowler hat closet, and a coatrack with bowler hats on it.

Emma let her body lay down on the cold floor.

She was stuck here. For real. All of this was real.

Her body still hurt from running into that cat monster last night. Her skinned knee. . .
The pillow-flamingo-cat thing squawked again. Emma lifted her head and looked up at it. Its head was unusually stretched out as it looked at her sideways. It was the cute kind of ugly, she thought.

“What?” She sat up, leaning on her forearms. “You want something?”

Its head shifted closer to her and chirped.

Emma scooted away from it. Its beak was way too close to her for comfort. But the further she scooted, the closer its head would come.

“Quit-ow!” She bumped into the coat rack.

She squeaked and shot up to her feet.

The coatrack crossed two of its limbs, the bowler hats never falling off. It seemed to sneer at her. “Humans are just so rude!”

The coat rack ha-rumped, opened the door and waddled away.
Before Emma could clear her head from the craziness, the teen with the rabbit ears came in.

“Hello, my dear. Did you sleep well in here?”

She shook her head clear. “I-I guess. But what is that?” She pointed to the animal thing on the bowler bed. It had nestled down once more, resembling the pillow she thought it had been.

“It’s a comfortable thing, isn’t it? Ties the room together. A good fit.”

She glanced around the room again. She muttered. “If you say so.”

“Let’s strut. We have to leave. I will escort you to your destiny.”

“Right now, though? What if that giant cat or-“

“Cat!” A mouse popped out of the side table and screeched, its little bowler hat shaking around. “Hide me! Hide me!”

The rabbit boy ran over and patted it on its head. “Go back to bed! No c-a-t here! Not at all. Dormouse, don’t bawl.”

The mouse whimpered but did as it was told and disappeared back into the drawer.
Emma pinched the bridge of her nose and shook her head. “This can’t be happening.”

“No rambling.” The boy put his gloved hand to his pale lips. “No C-word. He hasn’t come to grips.”

Emma closed her eyes. “His what? That didn’t even make any-“

The rabbit put his hand over her mouth. “Make few words, not many. Or our mission will go south.”

She rolled her eyes. There was no way in the world – or whatever this place was – that she would ever understand this guy.

Emma shrugged and left it at that.

The rabbit nodded. “Now let’s get out of this hat.”

She followed him to the door but stumbled right into him.

“The top!” He spun around, nearly hitting her.

Before she could respond, he handed her a set of clothes.

Where did he have these hidden?

“Your look is bedridden. Here are some clothes from the bartender. Put them on to look more like our wonderful defender.”

The clothes looked too big for her, but it was better than staying in her torn nightclothes. Especially if she was going to travel.

“That would be best.”

She looked up at the rabbit boy. He didn’t move.

His ears twitched. “You want some reprieve?”

She rolled her eyes. “Yes. I need to change and I can’t with you in here.”

“Out!” She pushed against him, surprised that he didn’t even budge.

His hand tightened into a fist, but he let it go and finally turned around and left.
Emma slammed the door shut, receiving a squawk from her pillow. The rhyming was wearing her down. What was with that guy anyway? Why was he so weird? She couldn’t believe he . . .

Emma stared down at the clothes in her hands.

She just realized she didn’t even know his name.

“He should have a name right?” She set the clothes down on the bowler bed, ignoring the flamingo pillow. She guessed she could ask him. As long as he didn’t rhyme it with something stupid.

She quickly changed, leaving the ratty nightclothes on the floor.

The button-up shirt was way too baggy. And the blue pants were way too long. They probably would have fit the bartender lady pretty well. But Emma knew she looked ridiculous. She was only fourteen and hadn’t even hit puberty yet. At least it wasn’t like when Adelle would take her shopping. That woman would try to get her into lacy dresses and oversized flowery hats. She hated-

Emma watched as the clothes began to shrink. The long pants turned into well-fitting capris. And the shirt laid properly on her torso. She didn’t need a stuffed bra to make her feel good, that’s for sure. Not that she ever did that . . .

A knock at the door. “Are you done, I must implore. We need to run fast to stop this war.”

“Yeah.” She walked over and opened the door. “How does it look?”

The rabbit boy nodded. “Right from a fashion book! You would be applauded. And it’s perfect for climbing-”

“Would you quit rhyming!”

Ah, crap! She was doing it too!

“Don’t be so blue! Or red or blue, for that matter. Now let’s go down and bid farewell to the tender and hatter.”

He spun around and led the way downstairs. Emma reluctantly followed.

She mentally slapped herself. She was stupid to go along with this rabbit. She should have just tried to find her way back through the forest to the mirror. Or never gone in the mirror . . .

“What kind of climbing are we going to do?”

“We will bid this hat adieu. Then cross the mountains to the castle. But this should not be a hassle.”

“Mountains?” She thought back to last night. She didn’t remember seeing any mountains.

“How long will it be until we hit the mountains?” She hated hiking.

“On the contrary, it will be to your liking. Do not fret, they are just outside of the wooden outlet.”

“You mean the door?”

“Please don’t add any more words to this score.”

She bit her lips, forcing herself not to scream at him right here and now.

A husky laugh came from the bar. Emma looked over to see the hatter sitting down in the exact same spot as he was last night after the bar fight-

No! No more rhyming!

“Leave while I’m still being nice,” slurred the man’s voice, as he grabbed from another drink that randomly appeared.

“Where did that come from?” Emma muttered.

She jumped as a hand touched her shoulder.

The woman, the bartender from last night, smiled softly down at her. Emma couldn’t look away from those big, blue eyes. They were mesmerizing.

It was the woman who broke their staring contest as she handed Emma a small backpack. It reminded her of the ones that the popular girls at school would wear. She doubted there’d be much in the bag, considering its size. But maybe the woman had packed a lunch or something.

The woman patted her head and then gestured toward the door and rabbit.

“Let’s not make this place a habit. Come, redeemer. No more of the hatter’s racket-” the old man cursed “-and step into the land of the mountain dreamer.”

“Leave before I do.” The hatter said right before he belched.

Emma gagged. She hurried out of the door to avoid any more of his attitude. Nasty drunk.

“So how did we get here? Did the hat teleport, or-”

She looked behind her.

The hat cafe had disappeared.

She saw the large hat and its long, skinny chicken legs disappearing back into the forest. How did she not see that before?!

She looked up at him. His red eyes stared back. He looked just like a cosplayer she knew from real life – well, from social media. Yet, this boy was a real rabbit. Weird.

“To tell you that I would be a-” He snarled, if only for a second. “Lame. It would be lame. Now I beckon. Let us go and put on a great show.” He turned away from her and towards the mountain range. “Keep close. These roads will change. You have to keep your mind on the castle, so there will be no hassle. And remember the Dreamer. It is not safe and is at times a screamer.’

“O-o-” she shut her mouth. She didn’t want him to rhyme anymore. She would just stay quiet and follow him until she was done with this crazy dream world.

“Don’t let your words be whirled. This is not a sphere of dreams. And nothing is as it seems.” He glanced down at Emma again. “This is no world, but Wonderland.”

© E.N. Chaffin 2018. All rights reserved. Any reproduction without author permission is against the copyright laws of the United States of America.